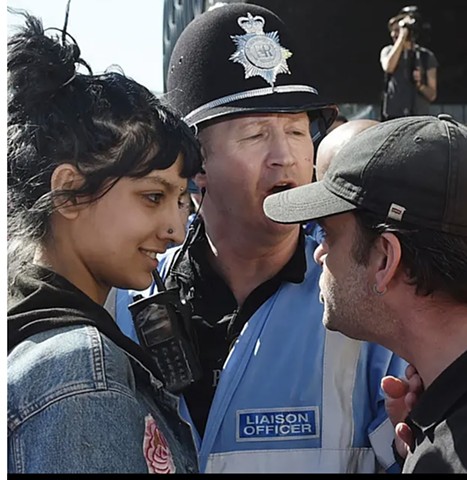 Quiet Refusal: B
< previous next >

Example of a quiet refusal A. Source: Google image search for Saffiyah Khan

I remember coming across this viral image of Saffiya Khan smiling at an anti- Islam demonstrator in Birmingham, England. Most stories report that the photo went viral, and that Khan had intervened because the demonstrators had circled around another Muslim woman Saira Zafar. I wonder if there is more to unpack than what is self-evident here. For my own interest in Quiet, I think a lot about how Kevin Quashie does not offer Quiet as an alternative to loud, but stresses in addition to. This could be one of the most recurring misunderstandings of his work. Despite his clarification, people feel that Quashie's assertion of Quiet is somehow a critique of resistance movements. However, Quashie never questions the necessity of protests. His work is prefaced on the dominant depictions of black communities as only loud, and points to the full range of humanity, desires, ways of being that are missing from these depictions.

When I consider the virality of Khan’s image, I wonder what resonates and how to unpack the layers. First it is an uncommon mass media depiction of a Muslim woman, and thus rubs up against the fixity that images can reinscribe about what Muslim women can look like. I wonder if there is a simultaneous empowerming message that Muslim women are contemporary that simultaneously gets into a messiness wherein contemporary might be conflated with anti hijab or pro assimilation, the way that multiculturalisms can subsume racial difference into invisibility. There is a way in which the virality is a public denouncing of the EDL, these extremists who are so “clearly” racist, that it alleviates those members of the public who are supposedly not racist. This particular article cites Piers Morgan as retweeting the image, stating, “The journalist and television host Piers Morgan hailed the picture the “photo of the week” and shared it on social media with the caption: “Enraged EDL racist stared down by amused, contemptuous Asian woman”. There is a way in which extremism provides a cover for Morgan’s more insidious form of racism in which he can denounce one form of behavior while othering Khan in the same sentence as a “contemptuous Asian woman”. But mostly I return to Khan’s smile and gaze, how Quiet does something in the photo, how it is a form of refusal on many layers. She is refusing to be a victim, she is refusing to be offended by the protestor’s words, she is in a sense untouchable, and the image of her expands the menu of options that women of color like me might refer. Is the sovereignty of her courage delineated by its precarity? What is at work to transform a moment of fear of past or potential injury into one of minoritarian humor?